A nationally recognized record dealer for the square dance scene of 1950s and 60s, Deluxe Music on North Milwaukee Avenue became a much more broadly appealing record store later on. By the time it closed for good, around 1994, it was one of the last great northside hubs for 45s in all genres.

The earliest published address we've found in our scant little bit of digging (your Dusty Groovers spend more hours than you'd believe running DG as smoothly as we can, so forgive us if our tributes to past shops aren't as painstakingly researched or detailed as we'd like...we know you'd rather us continue to be a thriving contemporary record store than to live too much in the past, though...) is at 3965 N. Milwaukee Avenue, eventually moving a block-or-so north to 4063 N. Milwaukee. The store's roots probably stretch as far back as the 1940s, and judging from the vintage trade ads we dug up, Deluxe clearly continued to fly the flag for the square dance scene until at least late 1960s. We don't know exactly when the store shifted gears from a prominent barn dance specialty shop, but the late 60s makes a lot of sense, not only because of the massive cultural shifts of the period, but for the fact that the once mighty Chicago-based WLS National Barn Dance radio program -- a pioneering country music show that began in the mid 1920s, even pre-dating Nashville's Grand Ole Opry -- ended in 1968. An early 70s change in Deluxe Music ownership might've steered things if the old vibe hung on that long.

Here's some thoughts from our friend Bob Condren, who provived the color photos below, taken weeks before the shop closed:

Deluxe Music at 4063 N. Milwaukee was a small storefront store.  It sold LPs and CDs but its main claim to fame was a collection of 45s that according to a Sun-Times article in 1994, numbered in the 70,000s with more than 14.000 individual titles.  It was quite a place.  The original owner was a bit quirky, a bit reminiscent of Tom Poston from the Bob Newhart Show. They had listening rooms at least through the 60s.

The front 75% of the store was albums and  then CDs, while the back 25% housed all those singles,  crammed in tightly in storage bins and behind the counter.  There were several stairs you had to walk up to get to the singles section.  I remember I was taken to task once for taking one of the singles out to look at. I don’t mean out of its sleave, just picking it out of the bins to see what title it was!  But most of the time they were pretty cool.

Bob Knack similarly remembers the store in a newsletter from 2007 at dixieswing.com:

Another exceptional record shop was Deluxe Music, at the "six corners" shopping area of Milwaukee and Cicero Avenues and Irving Park Road. It must have been there a along time because the giant neon sign outside boasted "square dance music" was available inside. The owner of Deluxe kept that store immaculate andhe always was first to get the new releases. In the back, there were stairs leading to a small balcony. At that time, that’s where a music lover could find the best selection of 45’s. Every time I’d come in, the owner would hover over me like a mother hen. I guess he was suspicious of a teenager spending so much time in the jazz section, but I sure did find many great records there. 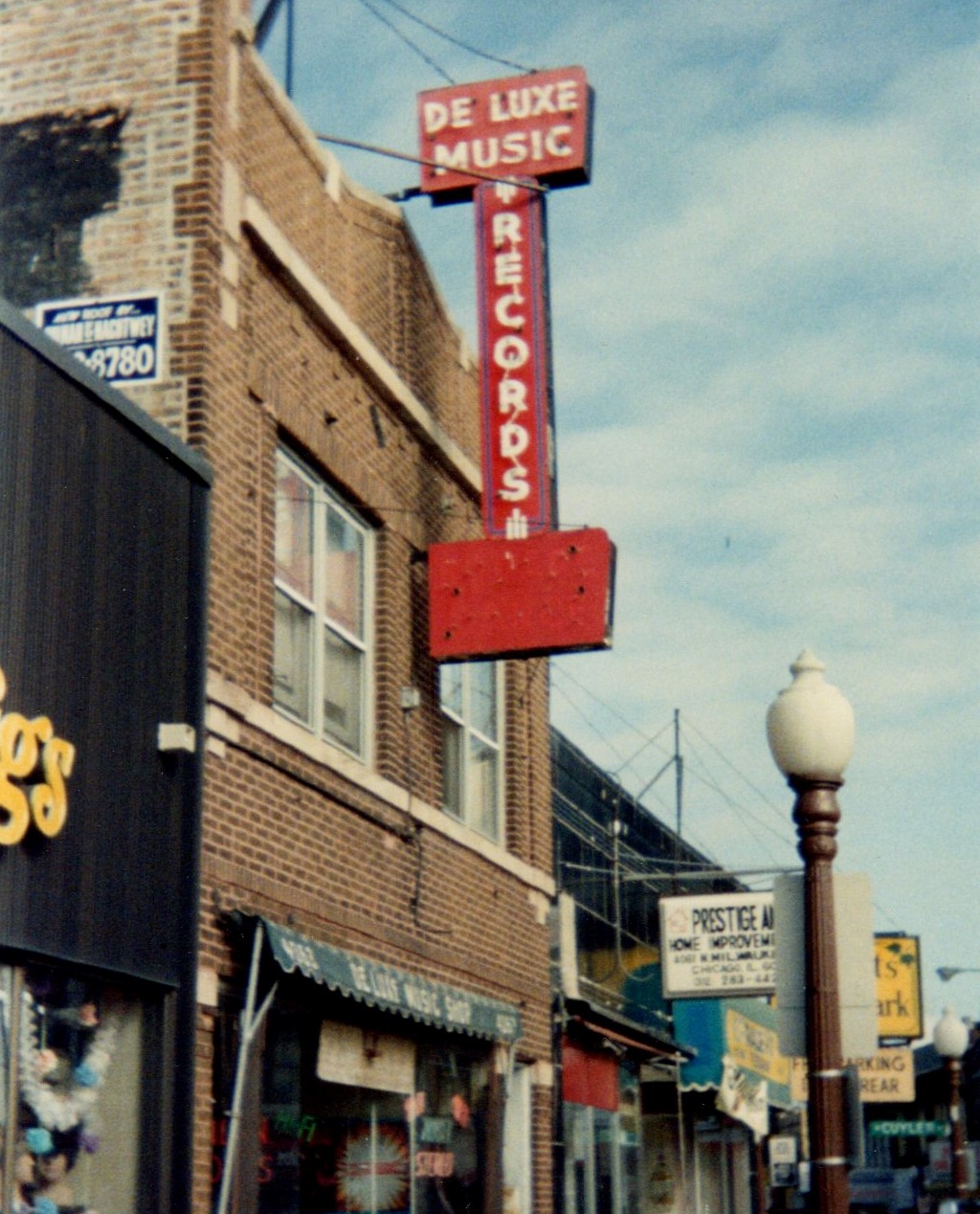 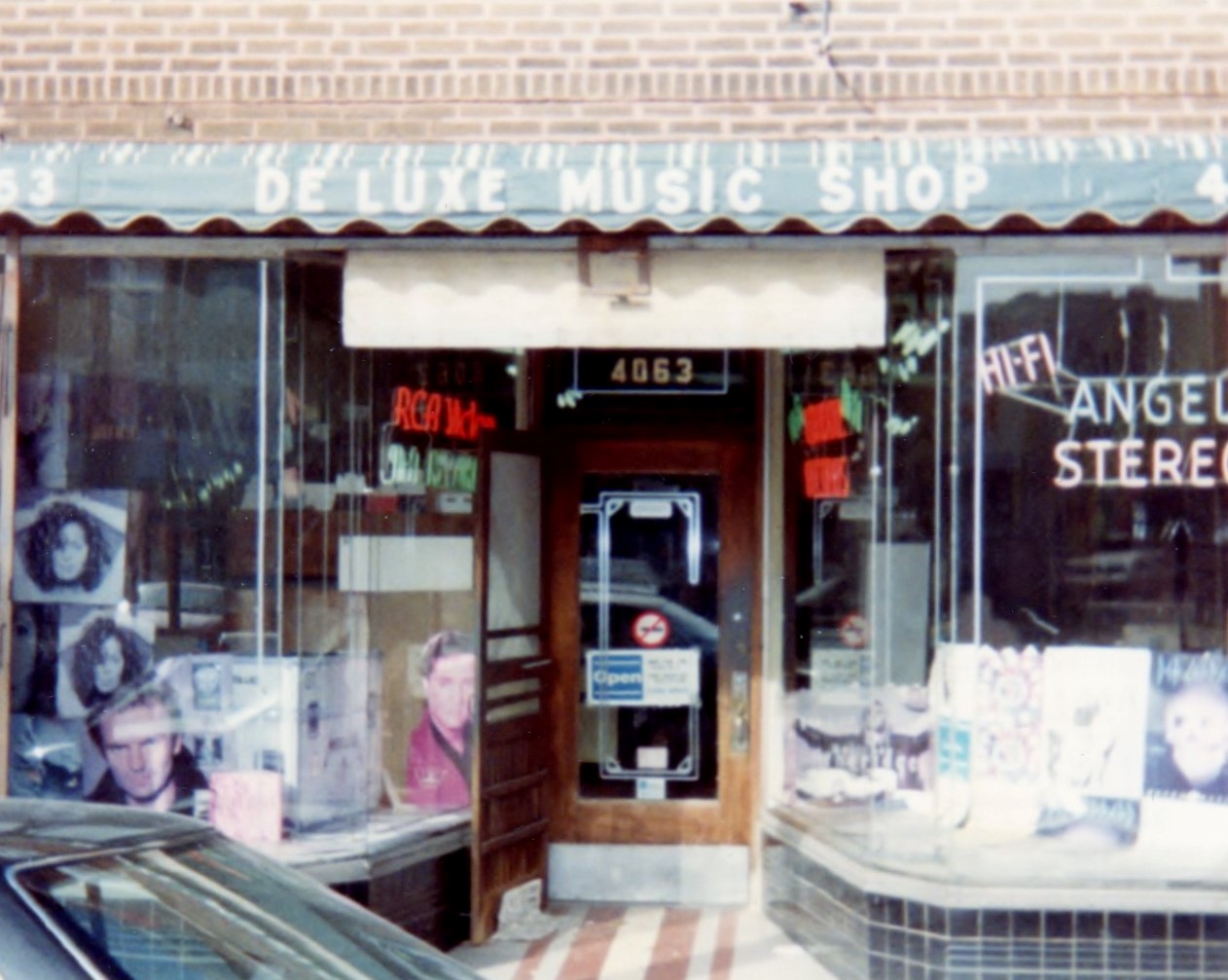